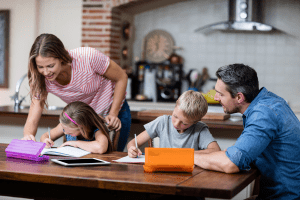 As if the daily struggle with homework was not enough stress, now you are being asked to help your child learn online and complete work via a screen. How are you and your children adjusting to this “online learning?”

There are only a few weeks left, but do you feel that your child has really “learned” how to learn for themselves remotely? It is not necessarily about the content but have they learned to be a self-directed learner or are you guiding them throughout each day?

All brains may struggle with this new way of doing things. However, an ADHD brain may struggle with the new way of learning, and the different “schedule”, the distractions at home, the challenge of not being able to ask the teacher whatever pops into their heads and the sitting in one place for longer periods of time. All this can make 30 minutes of work take 3 hours instead. Parents can become frustrated at the amount of time and coercing this work can take. Please remember your relationship with your child is the number one priority. Don’t let the pressure of getting the work done interfere with your relationship. This is new for them too.

Lastly, take time to connect with your kids throughout the day. Yes, it is difficult to balance the responsibilities of work with family life, but we are all experiencing this together. No one is expecting you to focus 100% on your job throughout the day. Take time for yourself and your family because when this is over – things will not go back to “normal.”  However, this “next normal” can be better for you and your family if you put the time in now.

What would you do? Things are not going your way and you are having one of those days. You know, the kind of day that you struggle to write that report, meet deadlines, you burn the new recipe, or fail at something that should be easy for you. You have messed up and you and everyone else know it.

What does that internal voice say to you when that happens? Do the ANTS (automatic negative thoughts) come marching in or are you understanding and patient with yourself? Will you pick yourself up and try again or resign yourself to not being “good at” X? Things like this happen throughout our lives and based on your level of self-esteem and your mindset you may either never attempt that again or jump back in with both feet and push through it until you get it.

Imagine that two students have received low grades on their test. Their initial reactions are similar as they are confused and disappointed in themselves. What happens next determines which of them has a stronger sense of self-esteem and a growth mindset. Student A is frustrated and discouraged and hides the test in her notebook and refuses to even look at it. She makes excuses about not having enough time or not understanding because of the teacher. (Empty)Promises to do better will likely not work out and her confidence in that subject will continue to decline.

Student B takes the oppsite approach. Although she is upset, she tries to figure out what she did wrong. She asks a friend about one part and goes after school to ask the teacher about the rest of the test.

How each had studied for the test, really doesn’t matter. They both felt confident going in. Student A takes the failure as an attack on her intelligence rather than on the effort she did or didn’t put in. Student B understands that whatever happened is a matter of the amount of effort she put in.

So if self-esteem according to Webster is: “a feeling of having respect for yourself and your abilities” what would you say about the amount of self-esteem demonstrated by Students A and B? There is a more important piece to this puzzle and it is responsible for that level of self-esteem…..mindset.

Dr. Carol Dweck’s premise is that there are two kinds of mindsets; fixed and growth. “Believing your qualities are carved in stone – the fixed mindset – creates an urgency to prove yourself over and over. “  So you strive for the good grades in order to feel good about yourself. Then when you do poorly on something, you feel like a failure. Your motivation dwindles because in this mindset, nothing you can do can improve your grade. You’re stuck in a fixed mindset.  (Click here to watch a YouTube video of Dr. Dweck)

On the other hand, “The growth mindset is based on the belief that your basic qualities are things you can cultivate through your efforts….everyone can change and grow through application and experience.” Same failed test causes the student with this mindset to study harder and to work at it until they get it (like Student B in our example). They are motivated to improve and believe there is no limit to what they can do with enough effort. While Student A may tend to give up before they even get started, blame circumstances or others for their failure rather than accept that they are in charge.

Here’s a chart from Dweck’s book, Mindset that clearly shows the differences between the two mindsets.

So, what’s a parent to do? Here are three things you can do right now:

Wouldn’t it be great if we started the new year by focusing on having a growth mindset? There would be no end to what we could accomplish knowing that it isn’t a matter of our intelligence but of our mindset. We could make excuses and run from challenge or we can stand firm understanding that it is all about the effort we put in and the courage to keep at it until we get it. That boost in our self confidence could be felt throughout the day in everything we do and in everything we think we might want to do. You have to believe in yourself (that’s actually the definition of self-esteem) and your abilities in order to succeed. A growth mindset is not just for kids – it’s for everyone!