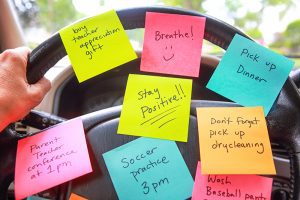 There are numerous theories about how the brain works, but what I have come to believe is that we can think of the brain as having three parts or personalities. They are the “robot”, the “Yoda” and the “monkey” brain.

The monkey brain is the emotional part of the brain, it is what happens when our self-control is gone and our emotions take control.  It is the brain that doesn’t think before acting and is often full of movement and impulsivity.

The Yoda brain is the brain we use for learning and making decisions (when emotions are not involved), it is the rational, thinking brain.

And lastly, the robot brain is the brain that controls our habits and routines. It is preprogrammed to do things automatically with little or no thought involved. The robot brain does not create habits on its own, especially if ADHD is involved. It takes training and practicing and often some tweaking before a set of actions can become a habit. Once there is a habit, the brain can relax and just follow through the motions without having to use up its decision-making energy.

Routines that use the “robot” brain can save you time and brain energy. When a habit or series of steps becomes automatic, you no longer have to think about what to do next. You probably already have several routines that you do each day.

You get the idea. There are plenty of opportunities to create a routine that helps you get through your day without using up valuable brain bandwidth.

Where Could You Use A Routine to Save Time and Energy?

If you answered “yes” to even one of the questions above, then a routine can help.

First, pick a problem to solve. Why is that a problem? Now, think about what it would be like if that was no longer a problem. How would your life be different?

Next, pick three steps (yes, just three) that you think are important for this new routine you are creating. It may not be the entire routine, but it is the 3 most basic steps to get you started. Now close your eyes and run through those steps in your mind. Does it flow smoothly or should you do the steps in a different order?

An ADHD brain can struggle to remember the order of steps which makes each day a new pattern. This doesn’t help create a routine and actually uses MORE brain power and decision-making energy. The idea of the routine is that when it is automatic, you are saving brain power and energy because there is no thinking involved.

Finally, find the order of steps that works best and “practice” doing it until it becomes a habit. Then you can slowly add more steps to the routine, making sure it works for you and the way you think.

It has been suggested that linking a new habit with an already established habit can make an effective “trigger” to start the new habit. Is there something you already do that you can link this new routine to?

Once you feel the first routine is working you can either expand it (although don’t make it complicated) or you can start to develop another routine to help yourself solve another challenge.

Habits are tricky things but once they are established – the benefits far outweigh the struggle at the beginning. Keep at it. We are here if you would like some coaching to help you design and navigate establishing new habits and routines.